Nothing else I write about this week has the gravity of the loss of a young artist’s life. The Cape Breton music scene was stunned this weekend when Philip Tarr passed away at his Sydney home at the age of 25:

The death is a tremendous loss to the community and its locally residing members could speak to it far more poignantly than I ever could, as they were present for his contributions and are thus most hurt by his absence. Tarr coordinated the Mess Folk outfit that put out a slew of MP3s and vinyl recordings in the past three years.

On a personal level, it was a reflection on my dissertation and personal transformation. My fieldwork was conducted in 2006 and Tarr and his brother James were but teenagers at the time, and not necessarily popular ones within the scene. They were agent provocateurs, if you would, rattling against the emo/screamcore trend of the day. Some of the posts on the CBLocals messageboard were under scrutiny for homophobia (the emo movement certainly bucked the masculine norms rock n’ roll sometimes presents) and disrupting the “signal-to-noise” ratio. Furthermore, the Tarrs were grindcore practitioners– or perhaps satirists of the amelodic genre– via James’ Canker project. They also formed a band titled The Abusive Stepdads.

Mess Folk steered more towards melody but it wasn’t necessarily greeted with open arms right away either. Philip famously called my hometown “a suitable hole to die in” in a Vice interview and MF’s content was occasionally inciteful on its face in the Stepdads vein (with song titles like I Beat My Woman Sometimes (And She Likes It)” and “Suicide Song”). The general arc of Mess Folk was exceptionally dark on its face but one reviewer noted, there was “a lot of snoot-cocking” in the band’s work. Tarr once told us through an online status that he feared ever living in the Brave New World; his music indeed reflected a lot of terrible misanthropic ugliness in the world.

Over time, however, Philip transformed into a scene notable. He likely won over several friends through work ethic alone (and his musical evolution to a 60s garage/punk throwback), but he also became a congenial peer and treasured friend to many. Only a few weeks before his death, he recorded an off-the-cuff track that is eerily autobiographical. It’s eerie to hear the line “I just want to be a musician” because it sounds like that was more of a struggle for someone who explored such dark subject matter while “just wanting to have some fun.”

It was a privilege for those who didn’t move away to get to know Philip on a level beyond his (alleged or not) “angry teenage troublemaker” days. If there were any demons haunting him in his life, I hope he had a chance to make peace on the way out.

On a far less sobering note, here on the southern side of the border, reality hit me today that I needed to get my notes together for the GSU Modern Media Conference, which finally descends upon the school on Friday and Saturday. My students at The Signal dedicated an entire insert to the conference program in today’s issue. It’s an impressive lineup of presenters, to say the least.

My hats are off to the students doing all of the work to help put this together. A localized media conference is not an original idea of the current students; the Student Media department used to have “Media Day” back in the 1990s. It was an idea that was bandied about at meetings for years by several students and myself, but finally current Signal EIC Sabastian Wee said “hey, let’s do it!” And do it, we shall.

I’m flattered to be among those presenters…those notes I need because I will be conducting a panel on review writing. My students even did a spiffy write up on me in the insert…nice: 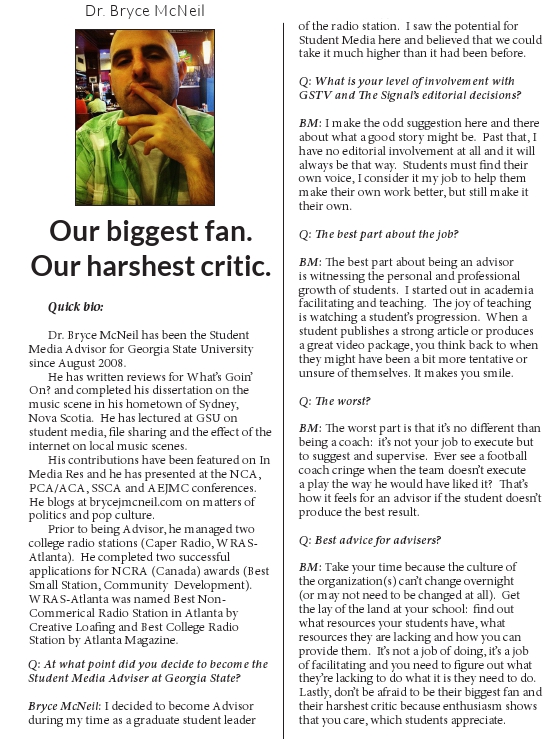 If you’re a journalism/media student in Atlanta, we’ll see you this weekend, I’m sure that with the group of great professionals we have visiting, you won’t be disappointed!

Fitting that it would be Wisconsin.

You might recall that Wisconsin is the state where the public employees protested a bill that would drastically affect teachers’ benefits (among other employees). Despite throngs of protestors descending upon the captial, public opinion polls indicated that there wasn’t a terrible wave of sympathy for the teachers. Several conservative critics framed them as nine-and-a-half monthers, cruising on blissful summer vacations and not working the full nine-to-five schedule. Others declared Walker’s eventual success pushing legislation through as a triumphant transfer of power from unions to elected officials.

Lo and behold, Wisconsin football fans- liberal, moderate, conservative and all points in between- were up in arms today as their pop culture darlings, the community-owned (imagine that) Green Bay Packers that were on the short end of an incredibly controversial ruling in Seattle last night on Monday Night Football. A controversial ruling that may never have happened if there wasn’t a lockout of the regular officials– normally the target of scorn, now suddenly the darlings of the sports fan set. It’s as if the karmic gods of organized labour decided to strike out at Governor Scott Walker’s biggest fan interests to spite him.

Suddenly Gov. Walker doesn’t seem to mind collective bargaining rights so much, something that one of his political opponents was all too keen to mention: “People end up thinking you can get good work for cheap, you can always find a cheaper way and it’s going to be just as good a result,” Larson said. “I would hope that Scott Walker is just as outraged about decreased quality of teachers that we’re going to get as he is with replacement refs in the NFL.” Of course, Vice-Presidential candidate Paul Ryan decided to steer it in the other direction, correlating throwing the “failed” replacement officials out to throwing out incumbents.

That football could become a political…football in this way is a pretty fitting commentary on political discourse. More than one Grantland reader wrote in that Romney or Obama could seal the election by bringing the NFL’s officials back and there doesn’t seem to be a hint of irony in what they’re saying. Wisconsin teachers– you know, the people who have stand in front of dozens of heckling adolescents every day in the hopes of shaping their future– could apparently disappear tomorrow and not garner as much sympathy as a crew of people who measure ball distances at sporting events for a group of million-dollar athletes.

It’s unusual because sports fans, many fiscal conservatives among them, seem to be judging the current officiating fiasco by the standards of community interest rather than by the cold, hard bottom line that they judged the Wisconsin situation. While the NFL is a non-profit, its shutting out of the officials is at the behest of 97% privately owned teams that rake in hundreds of millions of dollars who provide a service that directly affects a fraction of the lives that teachers directly affect.

One would assume the community logic would apply to the public employees, not the wealthy businessmen. No one’s arguing that teachers and firefighters’ worth are measured by how many beer commercials a school can sell. The NFL , however, conducts business for the private owner’s profits and isn’t one logical tenet of late capitalist logic that you’re worth what the market says you’re worth? That being the case, the locked out referees aren’t worth that much: ratings are as high as ever.

The locked out officials can make somewhere between $25-70,000 but without benefits, something they want so they can drop their other jobs. This is for significantly less than nine and a half months of “official” work. Yet when teachers walked out to attend a protest, it wasn’t spun by fiscally conservative critics as the government’s fault that the quality of education might suffer, it was the teachers’ fault. They had to think about the economy, not the community. Whereas in 2012, it’s not the referee’s fault that their absence is hurting the quality of play, it’s the NFL’s…even though the NFL has no economic impetus whatsoever to change their stance. Apparently, the quality of NFL officiating is a community, not a capitalistic, concern.

And here we are, with Wisconsin at the center of the discontent. A strange, but not-so-strange, world indeed.